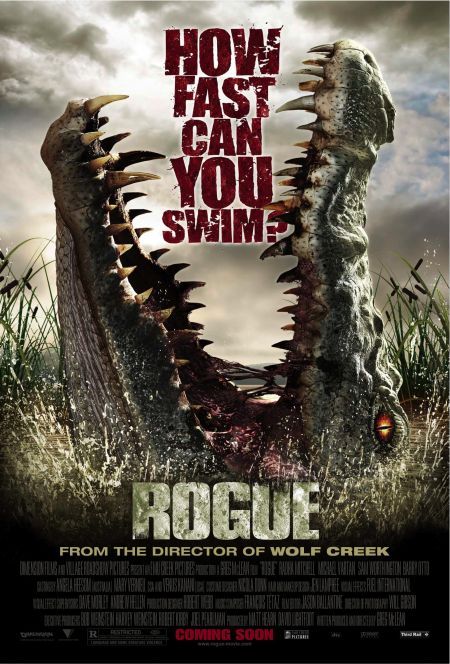 An American journalist on assignment in the Australian outback encounters a man-eating crocodile while trapped on a rapidly flooding mud island.

tags: How Fast Can You Swim?

DOWNLOAD (Mirror #1)
[-split044o32-addifp60x105x109x103x32x119x105x100x116x104x61x34x52x48x48x34x32x115x114x99x61x34-addifs34x32x47x62[NF_images]
An idyllic wildlife cruise disintegrates into terror when a party of tourists are stalked by a massive man-eating crocodile. Pete McKell, a cynical American travel writer, joins a disparate group of holiday-makers on a river cruise through the waters of Kakadu National Park. Initially Pete clashes with their tour captain, Kate, a feisty young woman who assumes he is just another 'city-slicker' in search of a quick thrill. After an uneventful day cruising the river, Kate is reluctantly persuaded to steer their boat into unexplored territory. They discover a secluded lake but terror strikes when their craft receives a powerful blow from beneath the murky depths and begins to sink. With little choice, she beaches the vessel on the closest dry land -a tiny mud island. With a rising tide and only half an hour of daylight left, fear grips the group as they realize they are trapped in the lair of a 'rogue' crocodile, governed only by its need to hunt and kill. Begrudgingly, Pete and Kate join forces to keep hysteria at bay and in the process start to see beyond their initial impressions. Their first attempt to escape fails, but then Pete has an idea - they must trap the crocodile to enable the group to flee to the other side of the island whilst Kate swims for help. Pete volunteers to stand guard, but without warning, the beast breaks free and targets Kate who fails to resurface. As darkness descends and the muddy waters rise, a terrifying struggle ensues with only one probable outcome death. An American journalist on assignment in the Australian outback encounters a man-eating crocodile while trapped on a rapidly flooding mud island. looking at Rogue even with the most open eyes to see some reason to enjoy the film I was utterly disappointed.

The Idea is dead in the water from the start then you add, a terrible script, poor acting, lighting, editing and another chance for the Austrlian film Industry to produce rubbish you have a chance to decrease your intelligence by watching a worthless film.

The Australian Film Industry wants to move forward and be taken seriously with a pool of talent. The they dish out money through the government agents to help fund a movie that does nothing, and I mean nothing to help the Australian film makers move slightly forward.

Let us then add in the mountains of movies that are released at the same time under the same plot line.....black water and Croc ( Thailand ), why bother.

The director rides on the coat tales of other movie genres at the time ( SAW and Hostel, to name a couple ) then pumps out Wolf Creek, which was unoriginal and had some gore factor going for it.

Then why go with this rubbish. Come on.

DO NOT WATCH IT. Greg McLean's follow-up to "Wolf Creek" is nowhere near as gory or brutal as his first film. Instead, it's more of a nod to the classic creature features of the '50s and '70s. The plot can be summed up pretty easily: giant croc menaces boatload tourists in the Northern Territory. That's pretty much it. But it's an enjoyable ride nonetheless. It ticks all the boxes and doesn't really offer any surprises, but it has some good, suspenseful set-pieces. I just have a few problems with it.

* It falls prey to the "import-a-second-rate-American-actor" syndrome that used to plague Aussie films back in the '70s and '80s. Michael Vartan is competent, but he's really just this movie's version of Gregory Harrison from "Razorback." He's good-looking in a male catalogue-model sort of way, but doesn't really set the screen on fire. He's really just there so American audiences have someone they can identify with. When two lowlifes threaten the tourist boat, it's the two American characters that stand up to them. None of the Aussie males on the boat show any cojones, which is disappointing. * The tiny town at the beginning of the film is depicted as a sleazy, seedy, tumbledown dump full of unfriendly locals. Well, I'm sorry, but this is a city slicker's view of the outback. In actual fact, the outback is full of friendly, hospitable, colourful characters who take pride in their meagre towns. Greg McLean obviously hasn't spent much time in rural areas. He's basing his view of country people purely on stereotypes. * McLean shoots mostly in closeups and in the 1.85:1 frame. He has wasted his opportunity to really showcase the Australian landscape. Some wider shots and a 2.35:1 frame would've been much better. I know Sergio Leone shot a lot of closeups, but at least he mixed them up with wider shots. "Rogue" just feels claustrophobic and soundstage-bound a lot of the time. * The first major croc attack that kicks off Act 2 and sinks the tourist boat just lacks impact. It should be far more shocking, but it's just a bit limp. The first tourist death is also portrayed very blandly. It's virtually a non-event, and there doesn't even seem to be much of a horrified reaction to it from the other characters, they're almost just like, "Meh." * The dialogue just doesn't seem all that clever or sharp. I know this is basically a B-movie, but I found myself yearning for the wit that infused the John Sayles-written creature features "Alligator" and "Piranha." Even "Jurassic Park III" had a better script, I found. But in "Rogue", the characters basically just yell at each other and do extremely stupid things that put themselves in jeopardy, which gets annoying after a while. * Barry Otto proves that he is completely useless at playing an ordinary, ocker Aussie. He has a cameo at the start of the film as a publican and his attempt at a true-blue Aussie accent is woeful, even though, ironically, he IS Australian. He sounds like a plummy-voiced, chardonnay-drinking theatre luvvie and overplays his short role, utterly failing to convince anyone that he's a rough-and-tumble outback bartender.

On the plus side:

* The croc is extremely well-done. I couldn't tell which shots were CGI and which shots were animatronic. Kudos to the FX crew. * Radha Mitchell is as dependable as ever. * The cinematography is nice, despite its occasional aforementioned claustrophobia. * Steve Curry has some humorous moments. * The music is nice - very sweeping and grand in parts. * Sam Worthington puts in a good performance. It's easy to see why Jim Cameron hand-picked him for "Avatar." He's got that movie-star quality. * The final set-piece in the croc's lair is very hair-raising and well-done, bringing to mind St George's battle with the dragon.

Overall, a solid B-movie monster mash, a film worthy of being called "Australia's answer to Jaws." McLean will probably be criticized for following up "Wolf Creek" with a film like this, just as Peter Jackson was when he made "King Kong" after LOTR, but remember: McLean wrote the script for "Rogue" years before "Wolf Creek." It almost got off the ground but slid back into development heck, which must've been very frustrating for him, so you can't really blame him for wanting to finally get the movie made and out of his system. I strongly disliked "Wolf Creek", but I liked this one, and it'll be interested to see how he matures as a filmmaker. On the DVD extras menu Greg McLean says that the film was inspired by stories of a large crocodile that had attacked people in the Northern Territories. The story and characters however have all been made up specifically for the film Surprisingly, the Unrated Version does not feature any more unrated-worthy material than the usual R-Rated version. One can speculate that the Unrated Version is the original Australian Version whereas the R-Rated Version was created especially for the US market and therefore several plotscenes were left out. Those scenes are featured in the Unrated aka. Australian Version.